… that’s what the title of the newspaper article read back on 5 October 1956 when my uncle was killed in an Air Force jet crash. He flew out of March AFB in Riverside, California.

He piloted a B47. The Boeing B-47 Stratojet was a medium-range, strategic bombardment aircraft developed around a shoulder-mounted wing with a 35 degree sweep back wing with six podded engines slung below the wing. Here’s a photo of one if you’re not familiar with them: 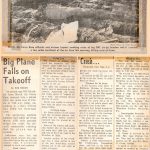 A newspaper article listed details of the crash and the victims. I don’t know exactly which newspaper or what date the issue came out, but I have and old, faded, yellowed copy of it that I have scanned here. Sorry for the scotch tape marks on it…
Killed in the crash were Capt. Joseph A. Santino, Capt. Edmund S. Temple, and Lt. James L. Carter. 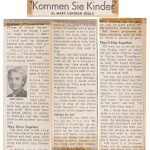 Mary Healy, a columnist for the LA Tidings, was a friend of the family, and talked about them in her article the following week. I also have an old copy of that newspaper article:

While searching for details of the incident online, I found several websites that list the fate of all B47 aircraft as well as some other information. Here is what I have been able to compile:

Based on the sites listed above, I’ve learned that my uncle’s plane was number 51-5230, and I’ve also learned that there are surviving models still in existence. My current goal is to go visit the March Field Air Museum someday.