’twas a dark and stormy night…

OK, it wasn’t that stormy actually, but it does get dark quite early this time of year and it was raining! After trying to coordinate schedules for a little while, I was finally able to get out and spend an evening doing some night caching with friends.It wound up being a night filled with everything good about geocaching.

The Bad Cop, Dream Painter, and I began by heading to the Krampus Day event where we spent some quality time catching up with old friends, and meeting new ones. Then, it was off for our adventure with Buddy & Kitsy Meow! We tramped through the woods in Olympia for a couple of reflective caches, but they really weren’t what we were hoping for in terms of “night caches”. So rather than attempt any more, we headed back North to the “Control the Night” cache which was the reason we organized this outing in the first place. Years ago, I had done a cache in this location under the same name by the same cache owners, but it had been archived for quite a while. Team Noltex, however, recently broke their slump, and are active in the geocaching world, and I’m so glad they are! They are a class act, and their caches are among the best I’ve seen anywhere.

The rain was picking up a little bit, but we didn’t let it dampen our spirits. We set out on the quest to Control the Night, and it was as good, if not better, than I remember the original cache. I don’t want to give away the secrets of the cache here, but as the description states, this cache ” isn’t even remotely like any other night cache you’ve ever done“. It uses infrared technology and lasers. How cool is that?!??!?! As we progressed along the trail, we ran in to another cacher, and we all searched for the final together. The find was made after a small difficulty due to the weather, but all in all it was a fantastic find, and was quickly added to my all-time favorite list. 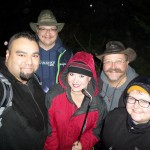 What a great night!

After Controlling the Night, we decided there was time for one more cache before calling it a night. Off we went to Fircrest’s Night Cache. We almost didn’t attempt this one, because it hadn’t been found in months, and the last 2 logs were DNF’s, but I felt that the odds of finding it were increased with a group effort, and it’s always very gratifying to find a cache after previous finders came up empty. We did struggle a little to find the trail, but once we were on our way, the glints guided us right to the final waypoint, and the find was made. The only real down side to this one was soggy wet logbook. Note to future cache hiders/owners: Use Rite in the Rain paper! It holds up very very well in the wet northwest weather, and the factory is right here in Tacoma! We snapped a group photo of the 6 of us (counting Clubby) and called it a night.

As I mentioned, this night included everything good about geocaching. Creative hides, overcoming prior DNFs, and best of all, time with friends. If you haven’t hit the trails in a while, grab a friend, get out there and cache on!